While a lot of USB interfaces these days offer a lot of inputs, many of these inputs are on digital connections, such as the 8-channel ADAT optical protocol. While this is a great way to offer a lot of connectivity in a small space at a good price, if you want to use it for recording microphones you’ll need to add additional preamps and analogue to digital conversion. 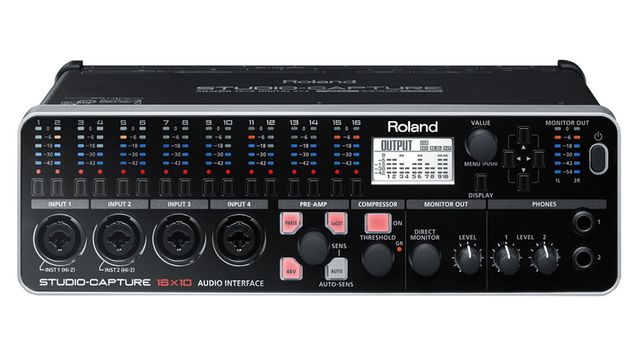 Sometimes though, you just want one box that does everything. The Roland Studio Capture USB 2.0 audio interface offers 16 inputs, 2 of which can be assigned to the S/PDIF digital input, and 12 microphone preamps with 2 inputs that offer high-impedance instrument inputs. With just this one 2U piece of gear, you can plug in 10 microphones, a guitar and bass directly, and two stereo keyboards, guitar amp modellers or other line-level devices: quite impressive for a single unit.

On the output side of things, you get 10 outputs with two headphone sockets and a flexible software mixer system that allows you to create four independent zero-latency monitor mixes with effects for cueing performers.

Dawsons Music is delighted to announce that the Red Dog Music brand is now part of the Dawsons family. This is an exciting opportunity to bring both communities together and create a stronger, wider network of people passionate about music gear. We both share a common heritage to support musicians throughout the UK and Dawsons want to support Red Dog Music customers in their continued musical journey.

Do I need a standalone microphone preamp?

Watching the football? Time for a Focusrite Scarlett!

This site uses Akismet to reduce spam. Learn how your comment data is processed.

We use cookies to ensure that we give you the best experience on our website. If you continue to use this site we will assume that you are happy with it.Accept Cookies